Chapel Sessions presents Celtic Routes with Richard Wood – one of the best “celtic” fiddlers in the world. From Canada he has been described as “Prince Edward Island’s Bow shredding Fiddling sensation”. If this wasn’t enough he will be accompanied by his friend and fellow Canadian the superb Guitarist & Vocalist Gordon Belsher.
Saturday 22nd October 2016, Doors open 7.00pm show starts 7.30pm (Bar open in Church Hall for beer, wine, real coffee etc. 6.30pm)
We have managed to get Richard http://www.rwood.ca and Gordon http://www.guernseycove.ca to fit in an appearance at Chapel Sessions as part of their Autumn UK and Belgium tour.

For more than two decades, Richard Wood has impressed audiences around the world. Highlights include TV guest appearances with Shania Twain on “David Letterman” and at Carnegie Hall with Irish legends The Chieftains.

Gordon Belsher is a recipient of the prestigious Music PEI 2014 “Lifetime Achievement” Award. He has been entertaining audiences around the world for 40 years and regularly accompanies Richard with featured vocals.

Tickets: £14 in advance 07702980677
Keep in touch via Twitter @chapel_sessions and Facebook http://on.fb.me/1QPcDc4
The acoustically acclaimed Chapel at Royal Victoria Country Park, is currently closed whilst undergoing major refurbishment works so join us at one of our new venues St. Edwards Church, Grange Rd, Netley, Southampton, Hampshire SO31 5FF. 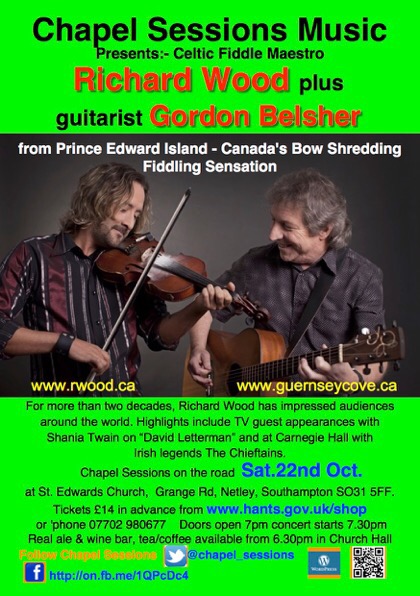